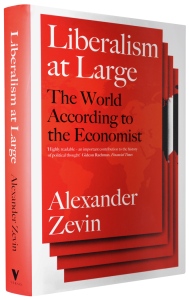 I have a review in The New Republic (where I am now a contributing editor), of Alexander Zevin’s Liberalism at Large. In it, I both assess the book and try to engage with the broader discussion of a “crisis of liberalism.” Here is the opening paragraph:

Warnings of a crisis of liberalism have become commonplace, as it is assailed by an illiberal right on the one side and a socialist left on the other. The situation is plain, and it is at least partially self-inflicted. Liberalism has missed opportunity after opportunity. It is not merely the tepid response to the financial crisis. One critic warns that already in the ’80s there were “fresh and full disclosures of poverty” and “the decay of rural industry and population,” yet liberals made no serious proposals for reform. “The old laissez faire individualism,” he reasons, “was still too dominant.” Nevertheless, he holds, there is the possibility of renewal. The cause of liberty can be advanced through social reform, through a more robust welfare state, through attacks on monopolies and unearned property. The writer is the social scientist J.A. Hobson. The year is 1909.