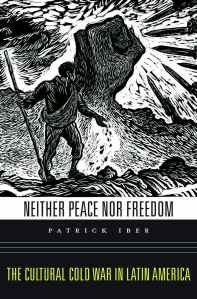 My first book, Neither Peace nor Freedom: The Cultural Cold War in Latin America, was published by Harvard University Press in October 2015. A number of book events have been scheduled: click here for details. If you would like to schedule a talk, please get in touch. A Spanish translation is being prepared for eventual publication by Paidós.

The book won the 2017 Luciano Tomassini Book Prize from the Latin American Studies Association. The award committee says that the “book’s demonstration of the multifaceted nature of foreign influence in Latin America, but also the limits of international power to shape the course of events in the absence of local allies, is of significant relevance also to understand current Latin American affairs.”

You can read an excerpt of the introduction to the book at Literal Magazine.

During the Cold War, left-wing Latin American artists, writers, and scholars worked as diplomats, advised rulers, opposed dictators, and even led nations. Their competing visions of social democracy and their pursuit of justice, peace, and freedom led them to organizations sponsored by the governments of the Cold War powers: the Soviet-backed World Peace Council, the U.S.-supported Congress for Cultural Freedom, and, after the 1959 Cuban Revolution, the homegrown Casa de las Américas.

Neither Peace nor Freedom delves into the entwined histories of these organizations and the aspirations and dilemmas of intellectuals who participated in them, from Diego Rivera and Pablo Neruda to Gabriel Garcia Marquez and Jorge Luis Borges. Patrick Iber corrects the view that such individuals were merely pawns of the competing superpowers. Movements for democracy and social justice sprung up among pro-Communist and anti-Communist factions, and Casa de las Américas promoted a brand of revolutionary nationalism that was beholden to neither the Soviet Union nor the United States.

But ultimately, intellectuals from Latin America could not break free from the Cold War’s rigid binaries. With the Soviet Union demanding fealty from Latin American communists, the United States zealously supporting their repression, and Fidel Castro pushing for regional armed revolution, advocates of social democracy found little room to promote their ideals without compromising them. Cold War politics had offered utopian dreams, but intellectuals could get neither the peace nor the freedom they sought.

Here, you can watch me talking about my book at NYU’s Tamiment Library.

“Erudite and engaging, Iber brilliantly combines the new histories of the global Cold War and the Cultural Cold War, and by doing so transforms our understanding of both.”—Hugh Wilford, author of America’s Great Game and The Mighty Wurlitzer

“Iber’s new account of the Cultural Cold War in Latin America is the best I know in any language, setting the standard for study of the region’s intellectual conflicts and politics in the twentieth century. Grounded in deep research in archives on three continents, it is judiciously framed, sharp in its questions and insights, often brilliant, always clear in its arguments, and remarkably wise in its conclusions.”—John Womack, Jr., Harvard University

In the Los Angeles Review of Books, Greg Barnhisel writes: “Patrick Iber’s Neither Peace nor Freedom: The Cultural Cold War in Latin America is measured, nuanced, and deeply informed. For Whitney, the only important player in the Cultural Cold War is the shadowy CIA. But for Iber, the central dynamic is the internecine struggle among leftists themselves, on top of which the superpower showdown plopped itself. “[T]he foundations of the Cultural Cold War,” he asserts, “lay in the fractured history of the global Left.” Yes, he grants, there were “front groups” on both sides, but, he cautions,

the language of “fronts” […] risks reducing the complex dynamics of the Cultural Cold War to a simple story of superpower manipulation. […] Front groups were indeed instruments of cultural diplomacy, but they were also the work of political and intellectual currents whose existence predated the Cold War, and whose sources lay in what might be described as the international Left’s civil war.

Pessimistic as Iber’s conclusion is, his book might give us some cause for optimism, or at least a sense of purpose, in these dispiriting times. A couple of weeks after the election, responding to the flap about Vice-President-elect Mike Pence being booed and addressed from the stage when he attended the Broadway musical Hamilton, Iber tweeted that one of the points of his book was that in authoritarian states, artists and intellectuals matter more. He’s right: as other liberal institutions — government agencies, the media, the business community — are co-opted, neutered, or replaced, art and culture become a major site of resistance. Artists and writers get under autocrats’ skin, and as they have little wealth to be confiscated or positions to be stripped of, they can only be stopped with the bluntest of instruments. Putin murdered Anna Politkovskaya and jailed Pussy Riot, and Erdoğan demanded that Germany prosecute Jan Böhmermann, who recited an obscene poem about him on German television. President-elect Trump started with Hamilton and Saturday Night Live, and it’s hard to imagine this will be the last time he tries to silence criticism, or that he’ll limit himself to tweeting. If we are headed toward a Turkish- or Russian-style populist authoritarian kleptocracy, as appears increasingly possible, artists and writers must stand in vocal opposition. It may not bring us peace or freedom, but it’s what we are here for.

In the Chronicle of Higher Education, Maggie Doherty writes that the book “will be an important resource for scholars across disciplines and fields.”

In H-Diplo, Renata Keller writes: “Neither Peace nor Freedom is an extraordinary book that deserves wide readership and acclaim. It offers fresh insight into familiar events of Latin America’s Cold War like the Cuban Revolution, while also breaking new ground on less-researched topics like cultural institutions and their collaborators. What is more, Iber is a gifted writer whose prose contains a great deal of evocative imagery, such as when he describes how “Cold War politics grew like strangling vines through the world’s existing political vegetation” (p. 11). Historians of Latin America, the Cold War, and cultural politics have much to gain in reading Patrick Iber’s excellent book.”

In Diplomatic History (September 2016), Alan McPherson writes: “Iber’s contribution to the literature is outstanding. It is not so unique to chart the doomed course of a divided left, a task in which Iber nevertheless stands shoulder to shoulder with none other than Jorge Castañeda. But he also sweeps across the complex landscape of Latin America’s intellectual and artistic production, familiarizing the reader with dozens of giants with such precision and ease, while also mastering European intellectual influences. Iber’s prose is elegant; his insights, confident.”

Nowadays, it is hard to avoid the nouvelle vogue of transnational history, which often means old-style international history given a fashionable terminological tweak. But some books, including Patrick Iber’s Neither Peace nor Freedom: The Cultural Cold War in Latin America, have genuine claims to transnational novelty, by virtue of tracing reciprocal flows of ideas and people–people who are not usually state agents–across porous national boundaries…

Iber’s conclusions are convincing but cautious. Neither superpower unilaterally called the tune, their shifting organizational agents achieved “limited” or “modest” results, resources were squandered, and initiatives led to “dead ends” and unintended consequences. Thus, the greatest success of the CCF was to help legitimate Fidel Castro and the Cuban Revolution, presenting the United States (and the CIA) with its greatest challenge in the Americas. While Iber does not categorically make the case (since he avoids assessing US policy in the round), his book strongly suggests that Joseph Nye’s much vaunted “soft power” was a blunt, unpredictable, and often clumsy instrument, whether in American or Soviet hands. On the other hand, some smart local operators—the collaborating cultural entrepreneurs—happily went along for the ride and did well out of it, as did several leading Latin American artists and intellectuals who feathered their nests for decades. Thus, while the book may not meet the expectations of, say, US policy wonks (being altogether too historical, allusive, Latin American, and literate), it sheds a good deal of light on the “fractured history of the global Left” (p. 21), the battle for the soul of Latin American organized labor, the impact of the Cuban Revolution, the Latin American literary boom of the 1960s, and the careers of several major Latin American cultural icons, whose reputations are hardly enhanced as they strut their stuff across these readable pages.

In the Journal of Latin American Studies (49:1), Tanya Harmer writes: “In the growing field of Cold War Latin American history, Neither Peace nor Freedom stands out as a major contribution. Although this is a story about ‘art and ideas’ it does not examine culture in a vacuum. Instead, Patrick Iber positions it within a political, socio-economic and organizational context. This helps explain the meaning and significance of the region’s cultural battles…Iber’s work is a must-read contribution that will shape the way the Cold War history of the region develops.”

The familiar story of the “cultural Cold War” is about North America and Western Europe, and most often about the Congress for Cultural Freedom’s initiatives to erode Communism’s intellectual prestige. Its highlights are sponsorship of abstract expressionism and the Iowa Writers’ Workshop, social democratic journals, and pirated Russian editions of Doctor Zhivago. Its defenders stand by what they see as a genuinely pluralist effort to undermine totalitarianism. Gloria Steinem—who worked with the CIA-backed Independent Research Service to bring Americans to the Soviet-Sponsored World Youth Festival—said she was “happy to find some liberals in government in those days who were far-sighted.” Critics echo Andrew Kopkind’s judgment that this was “a sham pluralism, and it was utterly corrupting.”

But the CCF operated in 35 countries, not just the North Atlantic. Iber shifts the focus to Latin America, where the U.S. and the USSR (and after 1959, Cuba) engaged in extensive cultural work to claim intellectual prestige. This is not just a matter of giving each region equal weight, but of showing how different the story looks from one region of the global south.

Neither Peace nor Freedom is a work of original, wide-ranging new research and a synthesis of existing scholarship that the author casts in a new historiographic frame. Iber coins the term “ironic Gramscianism” to describe one of the book’s most important findings: the U.S.-backed CCF’s most successful endeavor was to help Castro come to power. But in 1966, after it was publicly revealed that the CCF was funded and partially staffed by the CIA, the group, with its franchises in all of Cold War Latin America’s major capitals, rapidly lost influence. What were once seen as organic Leftist critiques of the Cuban government’s intervention in the realm of art and culture were rendered illegitimate hypocrisy by the fact that they were sponsored by the CIA. By painstakingly tracing the contradictory ways in which thinkers, artists, and trade union leaders worked with two state-backed organizations over many decades, and across several continents, Iber demonstrates the ways that politically engaged intellectuals with dreams of social democracy were repeatedly ensnared by the agendas of the superpowers trying to co-opt them. One association purported to support peace while sponsoring assassinations, and the other claimed to work for freedom while playing no small part in installing and propping up lethal dictatorships.

In the Latin American Research Review, Mark Eric Williams writes that the “impressive” book draws “on a vast array of primary and secondary sources from Latin American countries and the United States” and finds that

Neither Peace nor Freedom is a solid, enlightening work of scholarship. It offers something to historians, Cold War students, and humanities scholars alike. One comes away from reading it with a deeper understanding of Latin America’s intellectual history during this period and the constraints the Cold War placed on intellectuals whose clashing visions of achieving social justice through leftist politics remained at odds.