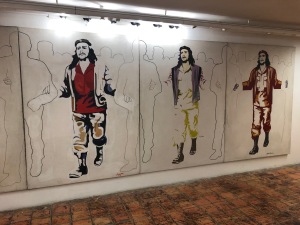 This course will provide a forum for learning and discussing the history of Cold War Latin America. Central themes include political violence, economic inequality, and social revolution. The class will feature a range of geographically and methodologically diverse readings that highlight recent changes to our understanding of the region in this period.  Broad interpretations will be put in conversation with specialized monographs. Readings include books that foreground political, cultural, social, and economic approaches, as well as insights from the history of gender, digital history, and transnational history. The course is open to all M.A. and Ph.D. students, including those whose primary area of study is not Latin America but who would benefit from the comparative analysis. The final project will be a historiographical paper on a topic chosen by the student.

This course counts for three credits. The credit standard for this course is met by an expectation of a total of 135 hours of student engagement with the course’s learning activities (at least 45 hours per credit or 9 hours per week), which include regularly scheduled meeting times (group seminar meetings of 115 minutes per week), dedicated online time, reading, writing, field trips, individual consultations with the instructor, and other student work as described in the syllabus.

Please note that in one week you can choose among a variety of books. I have not listed all of them here. Some books are available as ebooks or library reserve.

Amy Offner, Sorting Out the Mixed Economy: The Rise and Fall of Welfare and Developmental States in the Americas  (Princeton: Princeton University Press, 2019).

The first day of semester is Tuesday, January 21, and since our class is on a Monday we don’t meet until the following week. Please come to the first class having read Grandin’s The Last Colonial Massacre, which is available as an ebook through the library web site.

Exams last through May 8th.