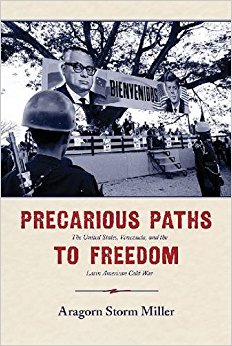 I have a review of Aragorn Storm Miller’s Precarious Paths to Freedom in the August issue of the Journal of Latin American Studies.

In the past several years, historians have been busy reconsidering certain aspects of the experience of the Cold War in Latin America. Instead of focusing only on U.S.-Latin American relations, they have given attention to the importance of other inter-American relationships, and have worked to restore agency to Latin American governments operating in an environment of overall U.S. hegemony. At the same time, there has been a larger debate around interpretations of the Cold War in the region. Did the left suffer anti-leftist violence because of a reactionary alliance between conservatives and the United States? Did the left forfeit its claim to moral authority by adopting the Cuban model, complete with its repression of civil liberties? Or did “extremists” of both left and right—the so-called “two devils”—usually ruin the work of sensible moderates?

Aragorn Storm Miller’s Precarious Paths to Freedom uses the exceptional case of Venezuela from 1958 to 1968 to argue in favour of the latter interpretation. There, he argues, moderates defeated the extremists, and the country was better off for it. Venezuelans ended the dictatorship of Marcos Pérez Jiménez in 1958, and then hosted a series of successful elections: choosing Rómulo Betancourt (1959-1964) and Raúl Leoni (1964-1969) of the social-democratic Acción Democrática party, followed by Rafael Caldera (1969-1974) of the Christian Democratic COPEI. By overseeing a successful transfer of power between two competing parties, Venezuela passed a basic test of a consolidated democracy. It did this with U.S. support, rather than U.S. hostility. Miller frames the book as an exploration of whether “there could have been a US-Latin American partnership that both promoted the democratic ideals that Washington espoused and provided the security and stability that Washington coveted” (p. x), and answers that Venezuela provides just such an example. Because of this, he makes the case that Venezuela was seen by Washington as the key to a stable hemisphere, and thus the “hinge” country in Latin America’s Cold War.

The narrative of the book takes the reader from the end of the Pérez Jiménez dictatorship in 1958 to Caldera’s election a decade later. Throughout that time, Venezuela faced various challenges from those that Miller describes as “extremists.” Betancourt, who had a long history as an anti-dictatorial activist, faced a potentially lethal challenge from Rafael Trujillo, the right-wing dictator of the Dominican Republic. Trujillo supported an invasion of Venezuela, used Dominican agents working as provocateurs, and supported an attempted assassination in the form of a car bomb that killed Betancourt’s driver and injured Betancourt. As a result, Betancourt suspended some forms of constitutional guarantees.

Though the attack on Betancourt helped make him more popular domestically, much of the book chronicles the struggles of Venezuela’s political parties to maintain popular authority. The youth wing of Acción Democrática (AD) disliked Betancourt’s cautious reformism, and after AD expelled some of its members in 1960, these young leftists eventually became the nucleus of the MIR, the Movimiento de Izquierda Revolucionaria. Bombings and guerrilla violence increased in intensity. Betancourt, on a knife edge because the military threatened to overthrow him if he did not act, charged the Communist left with operating outside democracy, and suspended some of the Communist Party’s and the MIR’s political rights. Guerrilla leader Douglas Bravo, meanwhile, said of Betancourt’s disappointing presidency that a true democracy would have had “vocal and decisive participation by the popular and progressive sectors” (p. 88). Presidents Kennedy and Betancourt, who were close allies and friends, and their successors, Leoni and Lyndon Johnson, worked to expand Venezuela’s counter-insurgent capacity. By 1968, the guerrillas, suffering from the strains of isolated combat, internal divisions, and military pressure, were largely defeated.

What Precarious Paths to Freedom does best is to provide a detailed chronological account of those turbulent years, with its eyes fixed on the security situation and the trajectory of the guerrilla struggle. The book succeeds in demonstrating that Washington could support more than one type of outcome, including electoral democracy, in pursuit of its Cold War interests in Latin America. The efforts at outside intervention—from the Dominican Republic, Cuba, and the United States—do show that Venezuela was an important site of Cold War conflict. The book overreaches, however, in arguing in the conclusion that Venezuela was the “heart of the Latin American Cold War,” that Washington devoted resources “to fight an array of extremists for control of its heart” and that US policy makers “saved the heart from 1958 to 1968” (p. 218). Too many countries had their moment of strategic indispensability to argue that any one of them should be taken as the “heart” of the conflict. And the analysis conjures a commitment to democracy from Washington that is contradicted by the preferences revealed by its actions elsewhere.

What made Washington’s material and political interests compatible with its verbal commitments to democracy in Venezuela was that Venezuela’s “democrats” shared its anti-Communism. (The U.S. didn’t hesitate to turn against democrats elsewhere, like Jacobo Arbenz in Guatemala or Juan Bosch in the Dominican Republic, when it thought they couldn’t be trusted to pursue anti-Communism with real vigour.) But that larger context is obscured in this book, both because of its narrow focus and because, as Miller acknowledges, Venezuelan archives were not available to him during his research. Instead, he relied primarily on the newspaper El Nacional, as well as U.S. diplomatic and intelligence files. (The chapter on Trujillo does use new material from Dominican archives.) This source base tends to reflect issues of security and conflict, mostly from the official U.S. and politically centrist point of view that aligns with the argument of the book. It would be interesting to learn about Betancourt’s views of how well Washington acted to support his version of democratic inter-Americanism. But not even Betancourt’s views are well-represented, even though there are published volumes of his writings, and many places where his correspondence can be found even outside of Venezuela.

Miller is right that what happened in Venezuela should be an important part of the picture in understanding U.S. power and priorities during those crucial Cold War years. But the effort to make the old “two devils” story new is not convincing. The book is stuffed with comparisons between “extremists” and “moderates.” Miller refers to a “Washington-Caracas partnership against extremism” (p. xi). Not only is “extremism” too broad a category to perform analytical duties, Washington can hardly be said to have opposed it on the right. But most importantly, those committed to exploring the achievements of Latin American “moderates” need to engage with the limitations of the political projects they admire, including the ways in which their alliances with the United States made certain democratic achievements possible, while simultaneously limiting others.