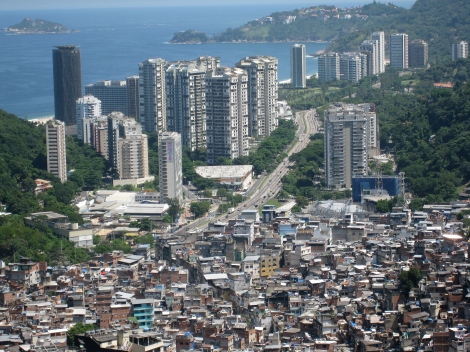 Update (7/5/2016): the popularity of this essay has exceeded my expectations many times over. It’s been shared widely and linked by Vox, Planet Money, and Deadspin, among others, and is circulating in translation in Brazil.

I have a review of Alex Cuadros’s “Brazillionaires: Wealth, Power, Decadence, and Hope in an American Country,” in The New Republic. It’s an enjoyable book to read but with very serious implications, and I try to link it to issues in global inequality and injustice.

Brazil is unusual among high-inequality countries in that its citizens are spread across the entire spectrum. (In the United States, by contrast, in purely monetary terms the poor are middle-income by world standards.) Brazil has people who are as poor as anyone anywhere, and yet it also has people who are as rich as anyone anywhere. Only one of Cuadros’s subjects expresses any remorse about this: Guilherme Leal, cofounder of a sustainable cosmetics company, told Cuadros it made him uncomfortable to be a billionaire in a poor country. “I think the happiest societies are the least unequal,” he continued,

where everyone can have a pretty decent, pretty reasonable quality of life. If I had to give up a significant piece of my wealth, thirty percent, forty percent, to higher taxes, but at the same time got to live in a country with less inequality, I would be happier.

Still, when his company was asked to pay hundreds of millions in unpaid taxes and fines, he said “Here in Brazil, if you don’t try to deal intelligently with the tax burden, you’ll go broke.” If Brazil’s inequality shocks the conscience, and leads to obvious injustices, then we must recognize that, as a global human community, we are all Brazil.